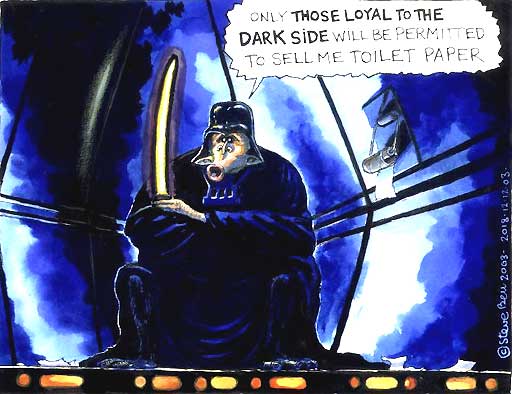 Only those loyal to the dark side will be permitted to sell me toilet paper.
汝、悪の帝國に立つもの、我にトイレットペーパーを売ることを許されるであろう。

Governments outraged by ploy aimed at getting more troops

The Pentagon's decision to exclude countries that opposed the Iraq invasion from bidding for reconstruction contracts provoked anger and incredulity in the capitals involved yesterday.

The bar on French, German, Russian and Canadian companies seeking more than $18bn (£10bn) in contracts, announced in a memorandum by the US deputy defence secretary, Paul Wolfowitz, immediately stalled attempts to heal post-war rifts.

The EU said it intended to examine whether the decision violated World Trade Organisation rules.

"We are asking the US to provide us with information so we can see whether or not their commitments with regard to the WTO have been respected," Arancha Gonzalez, the trade spokeswoman for the European commission, told Reuters.

The first casualty was Washington's attempt to have Iraq's international debts written off, which is being led by a special White House envoy, the former secretary of state James Baker.

Russia's defence minister, Sergei Ivanov, declared that Moscow was not interested in a deal, reversing the Putin government's readiness to negotiate.

"Iraq's debt to the Russian Federation comes to $8bn and as far as the Russian government's position on this, it is not planning any kind of a write-off of that debt," Mr Ivanov said.

The Pentagon's decision boosts the chances of British companies winning contracts, but the government was privately dismayed.

It is anxious that France and Germany should become involved in Iraq next year, and with as broad an international coalition as possible. It does not regard the US snub as helpful.

It wants French and German support for a new UN resolution in the spring to back the political process for a partial transfer of power to Iraqis, and for a UN-endorsed international force along the lines of those in Afghanistan and East Timor.

The German government spokesman, Bela Anda, said the decision was "not acceptable" and in contravention of "a spirit of looking to the future together".

The snub appears to have stunned German officials, who had believed that Berlin's relationship with Washington had improved since Chancellor Gerhard Schroder's meeting with President Bush in September.

The foreign minister, Joschka Fischer, said Germany had greeted the news with "astonishment".

The Canadian government threatened to cut off its contributions to the international reconstruction effort. In Paris a government spokesman questioned the legality of the restrictions under international trade regulations.

Last month's congressional legislation approving spending on Iraqi reconstruction did not limit contracts to supporters of the invasion.

With a possible legal challenge in mind, Mr Wolfowitz's memo defended the exclusion, saying: "It is necessary for the protection of the essential security interests of the United States to limit competition for the prime contracts of these procurements to companies from the US, Iraq, coalition partners and force-contributing nations."

But the memo also seemed to imply that the exclusion was intended as a financial incentive to countries to send troops to Iraq.

"Limiting competition for prime contracts will encourage the expansion of international cooperation in Iraq and in future efforts," it said.

"Coalition partners share in the US vision of a free and stable Iraq. The limitation of sources to prime contractors from those countries should encourage the continued cooperation of coalition members."

The White House pointed out that the excluded countries would be eligible for sub-contracts and that if they reconsidered sending troops, they could also bid for primary contracts.

The memo's publication at www.rebuilding-iraq.net appeared to surprise the state department and the national security council.

Philip Gordon, an expert on transatlantic relations at the Brookings Institution, who described the exclusion as "stupid and counter-productive", said: "This is another example of divisions in the Bush administration and the Pentagon's will ingness to just forge ahead."

Democrats and some moderate Republicans questioned the wisdom of the ban.

The Democrat senator Joe Biden said it alienated countries the US needed in rebuilding Iraq.

He added: "It's long past time we stop treating Iraq like a prize."

Democrats pointed to the profits made in Iraq by US companies with links to the Bush administration.

According to army documents Halliburton, the oil services company formerly run by vice-president Dick Cheney, is charging twice as much as other suppliers for taking petrol into Iraq from Kuwait.

It cited the risks of operating in the region as justification.